We use Sublime Text (2⁄3) pretty heavily at Flyclops.

We (and especially I) deal with a lot of JSON files. In my case, the majority of our backend is defined by AWS CloudFormation template files - and man, can they be long. So I wanted a way to browse them quickly.

So, I wrote this wonky, almost-working plugin for Sublime Text 3 (which is a “beta” but substantially better than 2) called JsonTree. It works by hitting a key combination (cmd-ctrl-j in OS X, or ctrl-alt-j in Windows/Linux) and brings up a tree-view of your JSON document that is browsable and searchable. Screenshot: 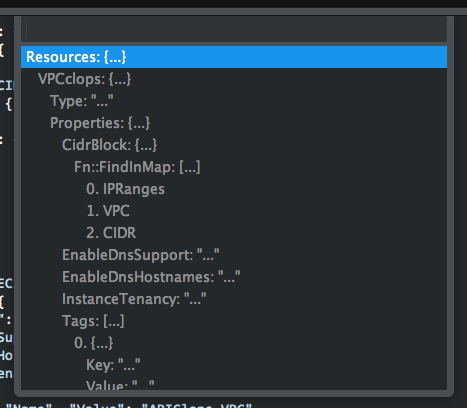 JsonTree has been accepted into the Sublime Package Repository. Grab the Package Control plugin and install JsonTree from there.

This is the second open-source code bit from Flyclops.